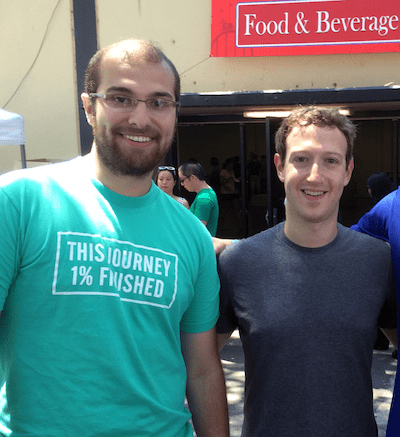 A picture with the man behind it all.

This summer I was blessed with an internship at Facebook in California as a Production Engineer. In all honesty, my expectations were blown out of the water; Facebook is so much more than I originally expected it to be and I couldn't get enough. From their internal tools to their long term goals, it really was a company that I was proud to work for and I found myself rooting for the products that we put out.

My job over the summer was to architect a fresh new solution to improve an existing API making it scale better and be more reliable. I found myself drooling over the various internal tools and services at my disposal that I could stack together much like Lego bricks in order to achieve my end goal. What we ended up with was an awesome globally synchronous distributed system that should make support on the API easier as well as having a more reliable uptime.

The fact that I actually have a system in production at one of the leading tech companies in the world is extremely humbling especially considering we got all of this done in a mere 12 weeks. Facebook is much more of a leader in the tech industry than I had originally expected and I still can't believe I got a chance to work with them. I'll be returning to RIT as the Facebook Campus Ambassador to educate what an internship with the company is like and answer any questions people may have.

I'm really stoked to see what is up and coming next!